Just a few weeks ago, a few of us from TKS returned from a culinary vacation in Italy. (That sounds so fancy as I type it!) If you've been reading, you know that we spent a week in the Abruzzo region perched on top of a mountain, cooking and learning traditional foods from the area. This dish, Arugula-Prosciutto Wraps, was one of my favorites. Of course they had just picked the gorgeous arugula that morning, and most likely nursed and cured the pig themselves, and good heavens, I'm sure someone's nonna was responsible for the prosciutto...not really. But the part about picking the arugula? Yup -- totally true, and you could tell.

The folks at the cooking school were super nice, but they were a little slow getting our recipes into our hot little hands, so I went ahead and re-wrote this one from memory. It's just about the easiest recipe ever, so don't be too impressed. I've made it since I've been home and it's a huge hit -- crazy easy and super yum. Give it a whirl this weekend! 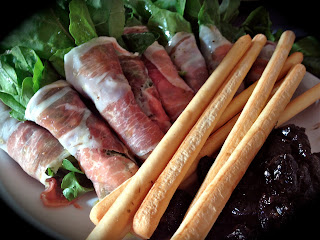 Divide the bunch of arugula into 8. Nestle 2-3 shavings of Parmigiano Reggiano on the arugula. Using one slice of prosciutto per batch, carefully wrap the arugula and Parmesan bunches, leaving a bit of the arugula stick out the top.

One note: You're going to want to use real, grown-up arugula (it's near the lettuce in the grocery store), not the baby stuff you get in the plastic container. And use good prosciutto too! The fewer ingredients in a recipe, the better quality each one needs to be. Word.
Posted by Chef Christine at 9:30 AM No comments: 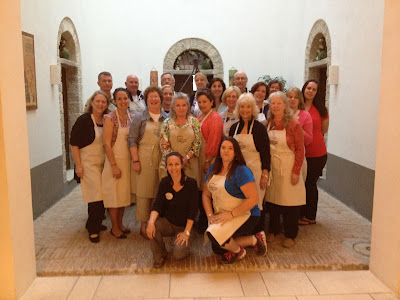 Posted by Chef Christine at 8:29 AM 6 comments: