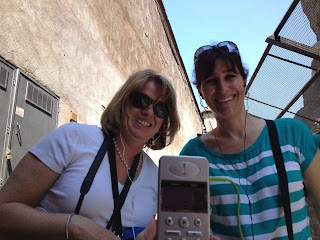 And now we've finally moved on to the reason for the trip...cooking! We're in Caruncchio, Abruzzo (Italy), and as I may have mentioned yesterday, we're on the top of a mountain...in a old castle-ish villa, Palazzo Tour d'Eau. It's crazy around here. All of the towns are perched on the top of the mountains, my guess is to more easily defend themselves during an attack. I actually think it's to make hysterical tourists more hysterical. Whatever. ;) What I think I'm actually getting though, is a real taste of Italy and the culture, albeit in a slightly sanitized American-friendly way. This isn't touristy Tuscany -- this is the real Italian country-side. It's very, very...quiet.

After a wonderful dinner Sunday evening, totally prepared for us by the terrific staff here, we got to move on today and get the ball rolling. We started the day the way anyone would start, tasting wine! We hit the Montepulciano, both cheap and not, in an effort to learn more about how to properly taste wine and to give the grape juice of the region a go. Our host, Massimo, knows a thing or two (or three or four...) about wine. It's always fascinating to listen to someone who really knows his stuff. The class went for some time, and ended with a "peasant" lunch. I must be a peasant, because it was delicious. Do the words "anchovy toast" make you salivate? Of course not! But it was indeed tasty, though I feel like every time I take a breath a giant fish holding a head of garlic is making an appearance. Good thing the family is thousands of miles away!

I try to steer clear of the typical food shots that are so pervasive and, uh, annoying, but I believe that a trip that required my very first passport breaks the rules a wee bit. Don't you? Here's lunch, missing the veggie frittata (yum) and a veggie torte in pastry (also yum):

So with full belly and droopy eyes, I dragged myself up to the room, snuggled under the covers, and then proceeded to check emails and do work until it was time for our first real class. I'd like to be better at this whole napping thing, especially from a castle in Italy, but there's always so much to do. Like get ready to cook...finally!

We tumbled into the basement kitchen, which doesn't make it seem nearly as fab as it really is. With high ceilings, gorgeous handmade mosaics, and a wood-fired pizza oven, this place is a rustic cook's dream come true. They use induction burners instead of gas due to local regulations, but since Cheryl & Dino were running that end of things, it didn't matter a lick to me. Over the course of the evening, we made stuffed artichokes (if you don't know about my fondness for artichokes, you may want to check here), arugula-prosciutto wraps, and tiramisu, which truthfully, I thought was one of those made-up American/Italian dishes. Take a look:
The cooking was pretty light for us. Trimming a few artichokes, crumbling some bread, pulling together the filling. Nice and easy, and a gentle intro to the kitchen and working together.

So there's the day. Looks like Tuesday starts with a pasta-making class, then caps the day with a truffle hunt (the Abruzzo region is known for truffles and saffron -- I had no idea) and a trip to the truffle-maker's home for a tasting. Stay tuned...

Brings a tear to my eye, knowing that you've never been out of the country to experience more of the world - and now there you are! Very happy to hear (and see) how much fun you're having! Looking forward to more pictures and stories, CVB! -IPD

What an amazing trip! I'm so jealous!