That's right -- it's time to get the teens and kiddies registered for summer cooking camp with us at The Kitchen Studio. We've got all new menus, all new recipes, and even a few new themes and time options to float your culinary boat. 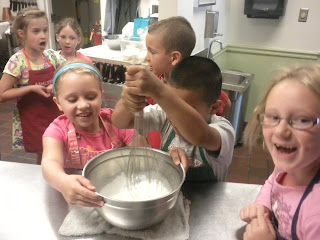 We take a great deal of pride in offering real cooking, with real cooking techniques. We're not big on "kid" food, but instead are more focused on getting dirty and really teaching about cooking on levels that the different age groups can understand.

We know that not every kid plays sports or wants to take summer sports camp, and our cooking camps provide a real alternative for kids ages 6-17. All of the age groups are terrific, and after 7 years of summer cooking camps (I know! I don't believe it either!) we've got the right instructors pegged for the right groups. Chef Keri-Ann makes those little guys hum along like they were all meant to be in the kitchen, while Chef Caroline can make those older elementary students cook like they never knew possible. We love that!

As for me, well, I have a soft spot for tweens and teens, and this summer I'm going to be working with the middle and high-schoolers. Dude -- I seriously love cooking with these guys. They're fun, they're sharp, they're witty, and they are the silliest group of all (but don't tell them that). But when they hone in and start really using their knife, or trying new things (Ryan and the lemon souffles in real hollowed-out lemons jumps to mind), well, it makes my hard heart soften just a wee bit. All in all, it makes for a pretty terrific summer.

Now, not trying to toot our own horn too much, (or really, more so trying to avoid the jinx), but I want to let you know that for the past 3 summers, we have sold every single spot in our camps. Every. Single. Spot. Last year, we had our first camp sell out in one day. One. Day.

Now, I don't know if that's going to happen again this year (can you say sequestration???), but you have been warned. Because we want to cook with your kids & teens. We really like 'em, and we know they're capable of more than smiley face English muffin pizzas. This is a case of you get what you pay for. For real.

Just as an FYI - our camps come in at $16/hr. for high quality instruction. Because there is no sitting around in our camps. Those kids are moving, and cooking, and using the best ingredients with the best instructors. We're even offering a multi-camp discount this year because we noticed that the majority of folks signing up kids for camp were registering for more than a single camp. Whether it's one kid taking multiple camps or two kids in the same family taking camps, we wanted to float a bit of a discount out to you. Do us a favor though...this discount is meant for immediate family only. We like our small business a whole lot and want to pass a discount to you the best way we can, while keeping things in control. Cool? We knew you'd understand, so thanks!

Sooooooo...get on over to the Kitchen Studio web site, jump on over to the June/July/August class calendar pages and get started. You AND your kids will be glad you did. :)
Posted by Chef Christine at 7:09 AM