In deference to Tom Colicchio, this should be called Red Wine Chicken Stew, not Coq au Vin, which we all know must be prepared with an old rooster and nothing, I say, I say nothing else. (Anyone else get the Top Chef and Foghorn Leghorn references? See how I did that? Awesome.)

I started Charcutepalozza bit late, and thus, my pancetta is a bit late. But no worries, I'm right on track for the brining challenge. Hello brisket!

So here's the thing: you do the challenge and then, once you're done, you say to yourself, "Holy crap, I've got a lot of pancetta! What the heck am I gonna do with it all?"

So you cut off great slabs and hand it out to friends, with explicit instructions to cook it thoroughly, less you be down one friend due to poisoning, which I'm seriously trying to avoid.

Then, supposing you had just taught a class on making Coq au Vin, you might also say to yourself, "Maybe I'll make a really lazy version of Coq au Vin, because I don't feel like going all in today and I'll just use the stuff I have on hand. HEY! I've got pancetta!"

So you see how I ended up here.

First of all, look at this gorgeousness: 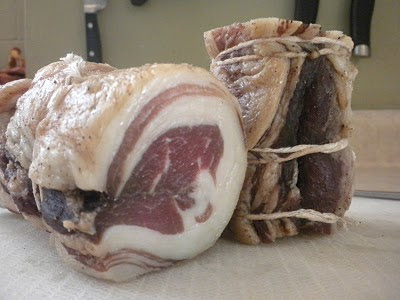 Even though I wanted to leave it whole forever, partially because I love being able to say that I've got meat hanging in the basement (it makes me feel a little badass) I sliced it, thickly, so that I would be able to get lardon-esque pieces out of it to replicate the bacon needed in the recipe: 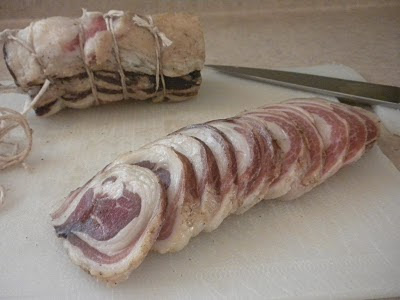 FYI - pancetta is essentially unsmoked bacon, so though it adds the fat and the meatiness, it doesn't lend any of that bacon-smokiness to the party. 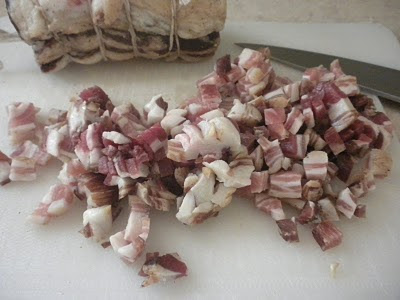 Funny...I seemed to get someone else's attention at this point... 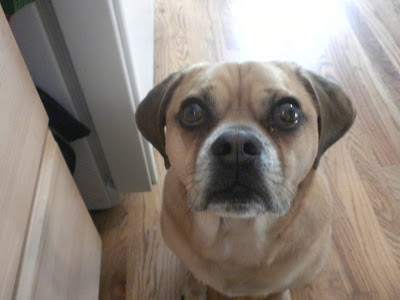 No Munchie. No pancetta for you!

I just bought a gorgeous red, enamel coated cast-iron Dutch oven at Sam's Club for $40 (Yes, I know they're the evil empire, but man, I love this pot, and it was really reasonably priced!) and thought I'd give it a whirl with this dish. So I jacked the heat up to high and tossed in my pancetta. 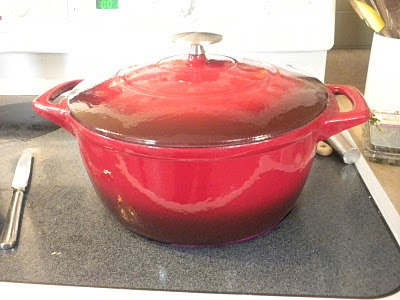 Just to prove that even professional cooks occasionally get it wrong, I'll let you know that medium heat would have been much more appropriate. I wanted to render out the fat, not kill it and burn my pancetta. So I turned the heat down a bit, saving me from myself, and let it do it's magic. Just look at that: 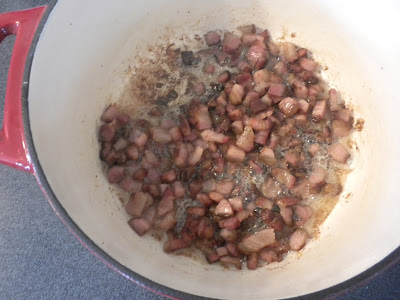 Once the fat had rendered, I pulled out the browned, tasty pancetta pieces and put them into a bowl. This was a major mistake, simply because apparently, my 14 year-old son just looooves pancetta. Or as we were calling them, bacon bites (which I know isn't technically true, but cut me some slack here).

I added the chicken parts to the pan to brown in the fat. Full disclosure: I did not have a whole chicken on hand, so even though that totally would have been my preference (bones rule!), I went with semi-frozen chicken breasts (do as I say, not as I do). 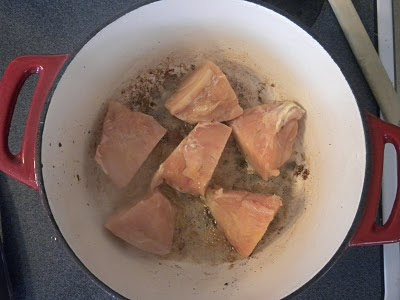 Once they were browned and beautiful, and not cooked through, I removed them from the pan and set them aside.

I left the remaining fat in the pan and added my mirepoix (fancy way to say carrots, celery, and onion), cooking until it was soft, about 5 minutes or so on medium heat. 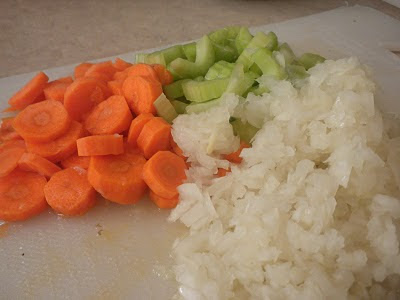 At this point I added about 1/4 cup flour, stirring it around a bit to get rid of that raw flour taste and to make a pale roux. (Interesting fact: The longer you cook a roux and the more color you get in it, the less thickening power it has. You're welcome :) 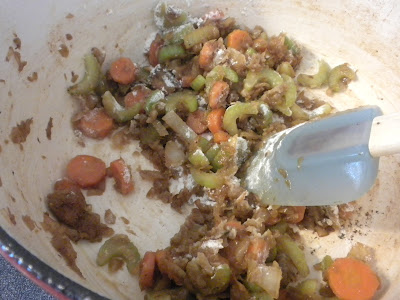 I also made myself a little bouquet garni, which in this case was essentially parsley, peppercorns, and bay leaves wrapped in cheesecloth. It save a lot of time fishing things out of your finished stew. 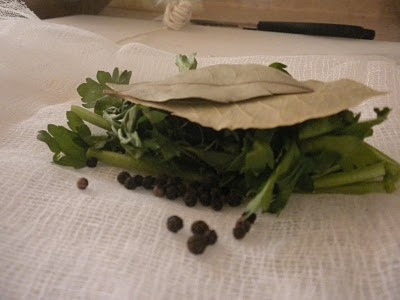 I added the equivalent of a bottle of wine to the pot, starting with just a bit and whisking until it was a little pasty, being mixed with the roux and all, then a bit more, all the while whisking, until it was all in the pot. I tossed in my bouqet garni, and added the chicken back to the pot. I also added a couple of fresh thyme sprigs, because I love thyme. 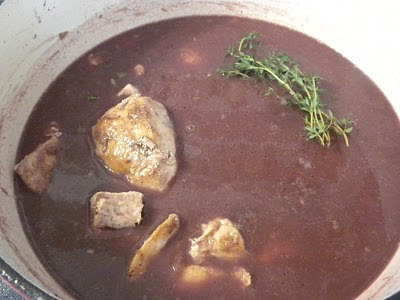 I turned the heat to high, brought it just to the boil, then immediately turned it down, way down, as in off and put it into a 325-degree oven for about an hour, hour and a half (I started reading and lost track of time).

This is where I tell you that if I was making real Coq au Vin, I would have then removed the chicken from the pot, drained the sauce to get all of the veggies out and leave a nice, smooth, sauce, squished the well-cooked veggies into submission to extract all of their juices and flavors, and then added a garnish of button mushrooms and pearl onions that had also been browned in the fat from the pancetta, leaving me with silky sauce, perfectly cooked chicken, and a delightful, flavorful bit of veggie with the mushrooms and onions.

But for real? Forget it.Since this was for my family, I left the mirepoix in because any way I can get veggies on that plate, I'm gonna take it. I also didn't have mushrooms on hand and knew I'd be the only one to eat the pearl onions, so I skipped those too.

And you know what? It was still pretty darn good. 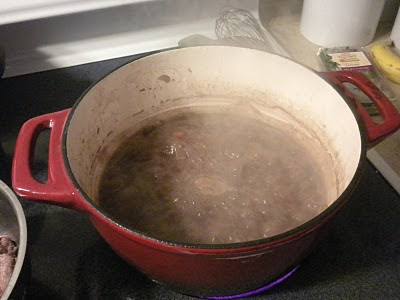 That's a close to a beauty shot as you're going to get (ha!), but I'll tell you what, they ate every bit of it, not just for dinner, but as soon as they all got home from school yesterday too.

Gorgeous it is! Then I scrolled down and a little sad face for Munchie. What a cutie!

Thank you for sharing!

Thanks! And let me tell you, Munchie the Wonder Puggle gets hooked up waaaay more than he should. Thanks for stopping by and I love your macarons. Gorgeous! I wish I could make mine look like that - shazam!