But truth be told, I thought I probably would. I didn't learn about the (still) fab Charcutepalooza until January 30, just a little more than 2 short weeks before the first deadline.

No problem I thought, I'll just speed things up.

I just gonna say that I don't really recommend speeding up charcuterie. Even though I probably could on the pancetta, simply because it's cooked before it's used.

That said, I actually did start it as soon as I could procure my ingredients (thus far the most challenging part of the whole shindig): 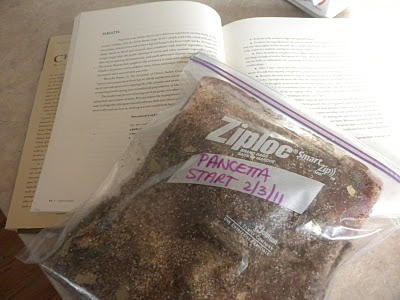 It's all rubbed in its cure, starting its 7 day settle in the fridge. Just a bit of rubbing and flipping, waiting for it to dry out a bit.

Then, after rinsing, doing a bit more trimming (my bad), I wrapped that sucker as tight as I could and hung it to dry. 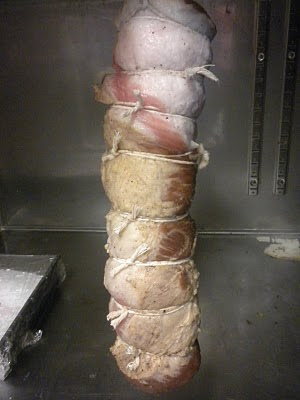 It's supposed to hang for a week or two, which definitely puts me over the deadline. However, I will throw caution to the wind and use it in something fab-u-lous this weekend. Another post soon to come, hopefully minus food poisoning. :)
Posted by Chef Christine at 4:12 PM