Celebrity Chef Camp In the News!!

Sometimes, you wake up and you just know it's going to be a good day. Today? Yup...it's one of those days. 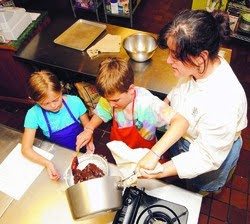 Photo by Bill Green of the FNP

There is an absolutely terrific article in today's paper talking about the Celebrity Chef camp at The Kitchen Studio. Celebrity Chef camp is a week of cooking camp for 8-11 year-olds that teaches the techniques and style of certain celebrity chefs. For example, the kids played with fondant one day in an Ace of Cakes-style cupcake class. (BTW-they loved it.) At the end of the week, we divide the kids into pairs and each pair does a demonstration for the entire class and their parents. They feel a little like rockstars themselves and leave camp feeling accomplished and confident. Win-win I say!


As I read the article today, I couldn't help but be proud of these kids, and truth be told, myself, just a little bit. Because Rochelle Myers, the writer, really captured what we're doing with kids. And I love that.

You can click on the article here: or you can read the copy below. If you want to see fun pics of the kids cooking allllllllllll summer long, check out our kid's cooking website at Gotta Break Some Eggs or "like" us on Facebook for Break Some Eggs or The Kitchen Studio Cooking School. I'm posting photos several days a week, and you can really see the kids getting into the cooking.

Teaching the Joys of Cooking


Special to the News-Post


There is a group of children ages 8 to 11 standing around a steel kitchen work table. About two-thirds of them are holding plastic spoons that have been lightly laced with cayenne pepper.
Chef Christine Van Bloem had just instructed a child to add some of the cayenne to some flank steak destined for fajitas, prompting him to ask what cayenne pepper tastes like.

Most of the kids were game, and so they stood about waiting for a cue from Van Bloem to try the pepper.

At her signal, the spoons disappeared into waiting mouths. There is a brief pause, and then the kids start screwing up their faces in the universal "yuck" expression.

As the tasters run off for cups of milk to dull out the burning sensations on their tongues, I am reminded of the principle of professional cookery that everything must be tasted. These kids may not have known what straight cayenne pepper tasted like, and Van Bloem warned them that they probably wouldn't like it, but this is Celebrity Chef Camp -- and these kids are eager to learn as much as they can about the world of real chefs.

Celebrity Chef Camp took place June 21 through 25 at The Kitchen Studio in Frederick , where Van Bloem used a different group of celebrity chefs each day to inspire her participants.
The week was photographed for Van Bloem's "Gotta Break Some Eggs" website (gottabreaksomeeggs.com), where campers could enjoy a taste of their own celebrity. A segment aired by WHAG NBC-25 reinforced the kids' star power, and their parents videotaped their newfound skills on the last day of camp. Through it all, the kids never stopped learning the real hands-on techniques used by celebrity chefs to produce delicious food.

"The whole idea of Celebrity Chef Camp is to capitalize on how kids are so enraptured by cooking shows. They are very familiar with celebrity chefs from TV. This camp gives a taste of that, and each day's activities are designed to be in the style of a different celebrity chef," Van Bloem said.
The first day was inspired by Mario Batali and Giada de Laurentiis: Campers cut their teeth by learning to make ricotta cheese and pasta dough, which they transformed into ricotta-filled ravioli. Rick Bayless and Bobby Flay inspired a Tex-Mex menu of fajitas and corn-black bean salad, followed by churros, while Rachael Ray's approach to quick and easy food translated to zucchini fries and panko-crusted chicken. Duff Goldman of the TV program "Ace of Cakes" inspired a cake-centric day, during which campers learned how to use fondant to decorate cupcakes. The camp wrapped up Friday with the kids preparing a dish they learned earlier in the week for their parents' cameras.

Van Bloem uses a hands-on approach to involve children in learning cooking skills. For example, she stands behind a child with her hands on the girl's hands when showing her how to use a chef's knife. The knife is long and sharp -- exactly the sort wielded by a celebrity chef on television -- and the girl's hands appear small next to the enormous blade.

With the help of Van Bloem's physical guidance, the girl cuts the garlic clove evenly and safely.
Van Bloem also uses lessons learned from celebrity chefs to illustrate helpful cooking techniques. For example, she cites Rachael Ray's "garbage bowl" -- a bowl set on the counter to collect cooking waste. Van Bloem uses a garbage bowl to collect corn cobs as she slices corn off the cob for a black bean and corn salad.

"Anytime you invoke a chef's name that's familiar, it changes kids -- it energizes them," she said.
"I try to adapt recipes like the black bean and corn salad to introduce new flavors to kids without overwhelming them with flavors. I'm not talking about hiding vegetables in a dish -- I will never lie to kids," Van Bloem said. "A lot of parents try to overwhelm their kids with a side of asparagus, rather than adding a little asparagus to a salad."

Her efforts pay off when the campers gather around a table to scoop up the black bean and corn salad for lunch.

"Are they using good technique? Are they doing something cool? Then camp was a success," she said.


FYI - Our summer of cooking camps is completely sold out. A happy surprise for us, not so happy for the folks who just found out about us. So this fall, we're going to offer several of our most popular cooking camps after-school. And next summer, we're going to somehow find a way to add more hours into the day and add a few more camps. Though it seems far away, mark your calendars now, because camp registration opens March 1, 2011. :)
Posted by Chef Christine at 8:30 AM