Oh yeah baby, that's right. Guess who got to take a little weekend jaunt to the City by the Bay? Moi! Meeeeeeeeeee!!

So here's how it happened:
I was spending a Sunday afternoon avoiding work and doing a little surfin' on the 'ole web, trying to find a little info about blogging, food blogging, and how to reach new audiences (I have a super awesome new project that I'm working on right now and was looking for a little extra input). Anywho, I stumbled upon the BlogHer site, which is essentially a blogging community for female bloggers. I started going through the site and saw not only that they hold conferences, but they were even holding one targeted just toward food bloggers. In two weeks! In San Francisco! A note indicated that the conference was sold out, but they were taking names for a waitlist, so I went ahead and put my name on the list (I know - I'm a wild woman :).
Just putting my name on the list got me thinking about whether or not I would even really go. Let's be serious here: the conference was in two weeks, and I'm a real planner when it comes to this stuff, it was in San freakin' Cisco, (which is not inexpensive to get to or stay in), and really, was I that serious about it?
I thought I'd send a little email asking the folks at BlogHer if they thought I had a shot at getting in.
Un-uh. Not gonna happen.
Darn.
But then, just a few minutes later, after sending another nice email, I got another response. Someone had a ticket for sale, and guess who could buy it? Yup - me.
So I did.
Quick check on plane tix to SF (surprisingly not ridiculous on Southwest), transfer of a room reservation (also not ridiculous), a few days of closed schools, and we were set. I even got to bring the hubby along. And not the kids.
So what was the conference like?

Intimidating (so many people I didn't know, so very loud, and a bit awkward for mingling and meeting new folks).

Educational (A big shout out to Jaden at Steamy Kitchen for keeping it realistic and Kalyn at Kalyns Kitchen for pushing on even though her time was up, and Pioneer Woman because I just love her blog and could just tell how awkward she felt, which made me like her more - I swear I am not a stalker)
Eye-Opening (The conference was limited to 300 people. That's 300 people with food blogs. That's a lot of food bloggers, and almost every single one of them was West Coast-based. Almost all of them were recipe sites too, which was a totally surprising to me.)
Swag-a-licious (The amount of free stuff I got from so many vendors borders on the absurd. In fact, I'm even going to have a little giveaway here in just a few days courtesy of one of the vendors. Curious? Well, just stay-tuned!)
Really, really FUN (and I'm talkin' to you JeanneBee, My World on a Plate new BFF)
Even though they fed us Bertolli frozen meals for lunch, complete with celebish chef Rocco Despirito running though the room flirting with all the ladies (more on that AND how I offended said chef in less than 90 seconds coming soon in another post...), it was wonderful. And I'm glad I went.
The very best part of the weekend? No doubt, it was the chicken liver pate & panzanella at Il Cane Rosso, a cafe in The Ferry Building (also knows as Foodie Heaven - helloooooo Scharfen Berger!). A perfect cool evening sitting by the bay, watching the boats go in and out as the sun set while eating the perfect relaxed meal with a kind, wonderful waiter, and super delicious, well, everything. I think that with very little effort, I could become a California girl. To clarify: A Northern California girl. I don't have the thighs to be a SoCal type. 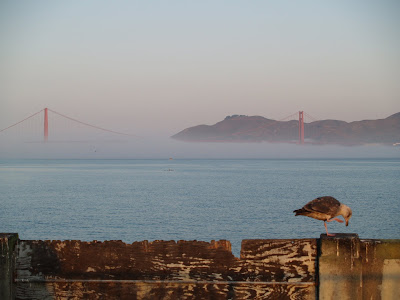 Posted by Chef Christine at 8:14 PM

Hey it was so good meeting you in person!!!

Right back 'atcha and absolutely can't wait to read your fab new book, coming out any day now! It's going to be a huge hit!

So glad you didn't think I was bad for pushing on! I really felt that it wasn't fair to the audience to stop in the middle and it did end up so we had enough time, so I didn't feel too bad about being strong minded! Glad you enjoyed the conference.

Not at all Kalyn - I thought the first session provided the most practical info and really did appreciate you making sure you got the info out there. I learned a ton from you! Thanks for speaking!

Christine, I am so excited for you! I am hoping to get to Blogher next year (you coming?) so I know that this was a minor miracle that the stars aligned like this for you!

Can't wait for Aug BlogHer, but I did love the more intimate(!) gathering of 300, especially since they were all focused on food! Still, being able to drive to NYC is a serious bonus. We'll have a blast together in NYC, my old stomping grounds!

I am so glad you went, sad I missed you though. It was a fun conference huh? Glad I found your blog!

Christine,
We're sort of neighbors and I was at BlogHer food too! There were so many people. It would have been great if they had us group up to say hello to other folks in our area. Didn't know how to contact you from your blog other than a comment. There are a few of us that were also at BlogHer Food from the VA/MD/DC area that want to get together. I'm going to try and organize a half day meet-up. Would you have any interest? Maybe have one topic that everyone can share their knowledge on so we can all learn from each other. Can't wait til BlogHer Food 10'. You can find me at www.thewholegang.org

Hey Diana! I wish I had known you were there! It would have been nice to have a local connection with someone...anyone!

I would love to get together with a group of local food bloggers. Send me an email at chefchristine at kitchenstudiofrederick dot com and we'll go from there. It sounds great.

I'd love to talk about the conference with you

Sounds like it was a great time. Wish I had gone with you!! I love San Francisco - one of my favorite cities in the world...