I picked up Martha Stewart's new cupcake book at Sam's the other day (13 bucks and change) because, well, I have a very serious cupcake problem. I've had a tough couple of days and nothin' says lovin' like two pounds of cream cheese. Am I right people, or am I right?!?!
JVB needed some sort of dessert to take to a staff party on Friday night (lucky me, I get to take 3 teenage boys to go see Land of the Lost instead, but that's another topic...), and since I am sooooo over ye olde Chippa Chippas on a personal snacking level, I thought I'd give one of Martha's cupcakes a try.

The Details: I chose this recipe because it was set to make 30 and I was not looking to double or triple anything the first time out with the recipe. To make these, essentially, you place an Oreo in the bottom of a cupcake liner, then mix up a very, very simple cheesecake batter, splash in some smashed Oreos (I should have smashed mine a little smaller) and bake.
The oven temp was listed at 275 degrees, which seemed a little low for me (I'll probably try 325 next time) and the cook time at 22 minutes. Mine took 33 minutes, which is 50% longer, and made me a little grumpy.
Anyway, I placed Oreos in 30 foil cupcake liners, then smashed the rest (12) and threw those into the batter. Note here, and this may have affected things, so I'll let you know if I'm wrong when I make them again. I did NOT use a muffin pan (at a 30 yield, I would need 3) and instead used the aforementioned foil liners on there own. Am I crazy or what?? If you're careful, those liners are not ony all shiny and pretty, but they'll also totally stand on their own. This could have changed the cook time because there was no hot pan surrounding the liners, but a 50% longer cook time just seems, well, too much of a darn difference.
The yield issue bugs me only because I portioned the Oreos for the bottom of the liners and easily could have made at least 4, maybe 6 more. That's wasted batter in my book; a travesty to cheesecake lovers everywhere. 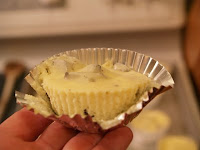 I wish you could see the fab whole Oreo on the bottom, but my mad photography skillz are lacking, despite just taking a class at FCC (instructor? fab! Student? not so much).

So, the book? So far, a BUY, but only if you're getting it at a discount (you should never, ever pay full price for a cookbook). There are several recipes in here that I am ready to bust a move on, but my spare tire is getting a little inflated, so I'm trying to watch it a bit. Are there any cookbooks that you use all the time? Let me know as I've got that cookbook buyin' itch.
Posted by Chef Christine at 9:20 PM

Mark Bittman - How to Cook Everything, 2008 edition. Got it for Christmas, and so far every recipe has turned out great. It also offers much simpler versions vs. many other cookbooks I have tried. This book may inspire me to cull down my cookbook collection (which is not something I would normally even consider!).