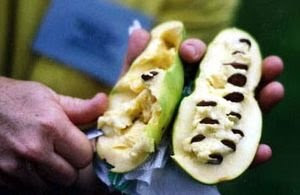 There were a few oval, black seeds each about an inch long, but we cast those to the side (Harriet is going to try to grow a paw paw tree -- how cool is that???).
So, does anyone know where you can find a paw paw around here? Harriet and Richard snagged theirs at a farmer's market in VA, but I'd love to find another one of these a little closer to home. Have you tried one? What did you think? I looooove finding cool new ingredients and trying to figure out what to do with them, but this one escapes me. If you want more info, check out the entry on Wikipedia: http://en.wikipedia.org/wiki/Pawpaw I pulled the pics from there, so they'll look familiar.
Pawpaw lovers...unite!
Posted by Chef Christine at 8:44 PM

They grow as understory trees along local rivers like the Potomac. http://growninfrederick.blogspot.com/2008/09/its-pawpaw-season.html

Thanks for the link! Harriet just brought two more ripe paw paws over last night and I'm going to try to figure out something to do with them.

The first responder is correct-they do grow along streams. They also require a bit of shade when they begin to grow and the seeds must remain moist. They need to grow in groves so plan to have about 20 to have a good crop for a family the fall.

If you pick paw paws, be sure you are on land that permits their harvest and removal. National Park Service lands don't allow taking seeds, fruits, flowers...anything from their lands.