Wow -- I don't know about you, but I am absolutely cooked from the holidays. Too much of a good thing I suppose, with the friends, and the parties, and the cocktails, not to mention the complete lack of physical activity that wasn't work related. I suppose it's a cliche, but new year, new attitude! 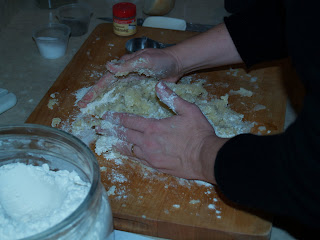 I started of my new year last night with a wonderful (if I do say so myself) dinner of homemade gnocchi. For those of you who don't know what these are, they are delicious little potato dumplings that are a snap to make. In fact, I'm teaching a gnocchi class on January 11 so I thought it would be best to brush up on my technique.
Gnocchi must be popular right now because not only did I find a great new recipe in a recent issue of one of my cooking magazines, but Martha Stewart also had one on her show, and with Francis Ford Coppola at that! You can check out Martha's recipe and/or the video here: http://www.marthastewart.com/portal/site/mslo/menuitem.fc77a0dbc44dd1611e3bf410b5900aa0/?vgnextoid=5d6f9eadc2ba6110VgnVCM1000003d370a0aRCRD&rsc=type_8&autonomy_kw=gnocchi
On my end, I had the kids pitch in to get things rolling (so to speak). The recipe is basic: Cook 2 pounds of potatoes (whole with the skins on) until tender, about 45 minutes, Mash & cool the potatoes, Add eggs, flour, salt, & pepper, Make a dough, roll it out and viola!, gnocchi!
You may be saying to yourself, "Self, why would I want to go to that trouble for some little dumplings?" Well let me tell you, they are sooooo worth it.
Now, I've never met a carb that I didn't like. Really. And to me, little dumplings covered with sauce, well, it just doesn't get better than that. I've taken the short cut for years, buying frozen gnocchi. I had almost forgotten what the real thing tastes like. They are so much better than frozen, that there's really no comparison. They are light, almost ethereal. They don't sit like lead in your belly. The are more than just an SDD (sauce delivery device). These babies are good. 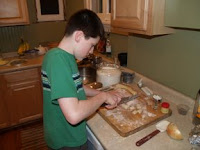 Gnocchi are so easy to prepare, I even had the kids pitch in. Not only did they have a blast, but they did a great job too.

Our one issue was that ours were a bit too big initially. In this case, bigger is not always better. The gnocchi were more manageable once we rolled the dough to about the diameter of my thumb. The kids even managed to get the little ridges going by using the back of a fork. I've since ordered 3 gnocchi boards for the class next week just so that the students will have the real deal if they're interested (Amazon.com - $2.99 each). 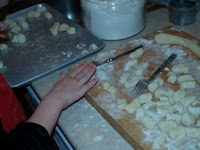 One last bit of info on these potato dumplings of love...did I forget to mention that they're also LOWFAT? That's right -- the only added fat in the whole dish was the 2 T. of olive oil I used in the sauce. How much do you love that? Every little bit helps, especially since I am now participating in a family version of The Biggest Loser - VB-style. More on that later...
Posted by Chef Christine at 7:42 AM

My mouth is watering - potato dumpling love will come to my kitchen!

I took Chef Christine's gnocchi class. There is just no substitute for feeling the dough to learn how to make them properly. I (finally) got around to making my own a couple weekends ago at home (with my new gnocchi board and potato ricer from Amazon.com). They were delicious, just like in class. I froze about half for later, and they came out a bit mushy (but drowning them in Bolognese... NOT low fat... worked wonders).

Thank you!! Once you've felt the dough, it's a much easier process. These have become my new favorite "emergency" meal. I always seem to have a few potatoes lying around.